As a kid, I continually “rescued” baby birds in the spring, thinking erroneously that they needed me to survive. There were sparrows, robins and even one pigeon that I kept for quite a while. Though I eventually ended this practice (much to my mother’s pleasure), the fascination with birds as pets never left me. So it was that while I was a student at Bozeman’s Montana State University in the early 80s, I acquired a black-billed magpie.

The magpie is a gorgeous bird with a trashy reputation. They are omnivores, eating everything from insects to seeds to dog food left in outside dishes, but seem to specialize in clean up, much like vultures, and are frequently spotted picking at road kill on highways in the west. They are regularly seen in the vicinity of gopher towns, where they snack on the flattened bodies of the small ground squirrels that succumb to speeding car tires.

Even in my twenties, I longed to obtain a baby bird to raise. There was something especially magical about a flying pet that didn’t really “belong” to anyone. I spoke with my ornithology professor who had mentioned in class one day that he kept a pet crow years before. Originally, I was seeking a crow, but the professor mentioned that a magpie would be easier to obtain and less controversial in terms of federal protection. Honestly, I have no idea when the black-billed magpie of the Western States joined the Migratory Bird Treaty Act, but in the early 80s, magpies were considered “garbage” birds. Even my professor confirmed that information. I knew where some accessible magpie nests were located, and he advised for me to take a young bird that was almost ready to fledge to ensure that it had proper nutrition from point of hatching, resulting in a healthier bird.

With that information, I drove the two-lane highway toward Helena one cloudy spring day to a section of windrow trees, several of which held magpie nests. As I climbed to one of the lower ones, the adults mobbed me mercilessly, but I was able to reach inside and pluck out a fully-feathered baby magpie. I named him Retch, after the character Retch Sweeney created by American humorist Patrick F. MacManus, a writer for Outdoor Life and Field and Stream. I had no way of telling whether he was male or female, but as you can see, I assumed that Retch was of the male persuasion.

By the time I got home about an hour later, he was already relaxed and seemed comfortable in my presence. He was soon begging for food. We accommodated with small bits of canned dog food, and he loved it, scarfing up as much as we would offer. Though he was fully feathered, his tail was still the short version of what it would become as an adult.

Retch was my constant companion, and even rode on my bicycle handlebars around town. As the days wore on, I took him outside more and more frequently, periodically throwing him up in the air so he could exercise his wings, and within a short span of time, he was starting to fly. Once he attained some aerial skill and the weather was warm enough, we let him stay outside, even overnight. In the morning, we could hear him with his noisy “yak, yak, yak yak!” begging for breakfast. I would open the window and call and he would bank expertly through the window and land on the kitchen table, his ear piercing “yak, yak, yak, yak!!” reverberating off the walls and ceilings. My husband and I took him everywhere. It was cool to have a pet magpie. He often accompanied us to my in-laws’ house for family picnics on the deck on the edge of town. Everyone loved Retch, and delighted in his antics. He would walk the railing of the deck, enjoying scraps from our dinner plates. I was in heaven.

Retch associated with my bicycle, having ridden on my handlebars. One morning, as I made coffee and tried to ignore his demands for breakfast, I suddenly heard him from the front of the house near the street, when he usually stayed in the backyard trees. I ran down the steps and out on the front porch, where I saw a young guy on a bicycle, shock and puzzlement on his face, my magpie sitting on his outstretched hand screaming for a meal. I apologized and took Retch from him, murmuring something about “my bird hasn’t been fed yet.” That was my first warning.

The second came a days later when upon my arrival at home, I ascended the stairs to the sight of my poor Retch enclosed under the overturned laundry basket, his beak sealed shut with a rubber band, and muffled “mmmm, mmmm, mmmm” sounds emitting from his throat. I immediately released his beak, opening up the complaints to full volume, and my husband relayed the story of Retch’s arrest and internment.

There was nothing dangerous about this magpie, but he did associate food with people. Turns out, that fateful afternoon he had spied a couple of small children playing in a neighboring yard and flew down to investigate and claim some treats. The magpie is a fairly large bird, and with those annoying “yak, yak, yak!” calls and accompanying wing beats, can look pretty threatening to kids. He had scared them to death. The mother had called the cops, who took my poor Retch and put him in the back seat of the cruiser, then went door to door asking “whose bird” this was. My husband was home at the time, and told the officer that while Retch was not really “ours,” he did come for meals and that we would take care of the situation. My magpie ownership had come to an end.

My husband’s aunt and uncle lived a short distance from town on property adjacent to open land. They also had children who loved animals. So on a very sad day, we gathered at my in-laws and introduced the kids to Retch. The kids were thrilled, and I noticed with jealousy and resignation that Retch warmed to them, even trying to “talk” to the children and imitate their high-pitched voices. They took Retch home with them. I never saw my magpie again.

A few weeks later, the report came that Retch had lived with them for a short time, then began to take forays away from home to join some other magpies in the vicinity. Eventually, Retch joined his new feathered friends for good, and failed to return to their house. While it was sad, his return to the wild was what I had originally intended. Wild animals should stay wild. I knew he would be happier living free in his natural condition, and I assumed that my Retch was gone for good. I often worried a little about his association with people, and prayed for his safety, should he decide at some point to terrorize anyone for food.

About a year later, my husband was at his parents’ house, a place that Retch knew well. He opened the door into the garage, when suddenly a fully grown magpie, complete with long black tail flew into the open door of the garage and landed on the trunk of the car. My husband blinked and stared; magpies are typically wary of people and fly away upon a human’s approach, but this magpie stood still on the car, looking at my husband with familiarity. He called out “Retch, is that you?” The bird stood for a few moments longer, hopped and turned on the trunk, and then stretched his wings and flew away.

Though it’s possible that this was just another black-billed magpie, I know in my heart that is was Retch. He was simply touching base to show how big he had grown, what a super magpie he had become, showing off his full plumage, complete with green-blue iridescence and a magnificent tail as long as his body.

Those are sweet memories, and an episode in my life that I haven’t recalled in many years until I told a friend the story the other day. And although Retch’s departure that summer of 1983 left a void, for months after, I was still finding small dried bits of canned dog food hidden in corners where he had stashed them. 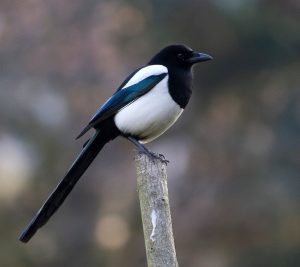