The Lighter Side of Alzheimer’s 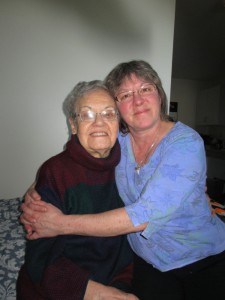 Barbara with her mother Marjorie Buls

It sounds like an awful title. I’ve thought about writing this for months, wondering who I might offend, who might understand, who would care, wouldn’t care, etc., until I made myself crazy. Writers expose themselves to criticism as soon as the words go down on paper. And we’re almost all insecure to a person, so we simply have to ignore the devil on our left shoulder and listen to the Muse on the right, particularly when writing about controversial subjects – like Alzheimer’s Disease.
And what a disease. Alzheimer’s basically means the brain is being absorbed or lost or eaten. It begins with the destruction of the hippocampus, responsible for storing experiences to long-term memory. This loss of memory is a warning sign and often panics people who think they have Alzheimer’s because they have a hard time remembering things. The difference is that Alzheimer’s is progressive and punishing, and keeps on devouring the brain. In the mid and later stages, emotional upheaval can include paranoia, anger, aggressiveness and depression. Alzheimer’s always ends in death, and there is no cure.
I was recovering from my own major surgery (spinal fusion), or I might’ve noticed my Mom’s decline a bit sooner. I was in constant debilitating pain and afraid to travel, even ten minutes in a car.
The fact that my Mom didn’t tell anybody about her surgery should’ve been the first clue. Around the middle of July during a phone conversation, she mentioned casually that she was going in for an operation on her leg, which had been causing her pain for some time. She didn’t remember what they were doing, just that it was surgery to correct the “pain in her leg.” I asked her for her doctor’s number.
I didn’t even try to hide the shock in my voice when I learned that she was having a hip replacement. The receptionist was very nice and gave me the necessary details, after which I called my mother.
“Mom, they said you’re having a hip replacement,” I said, attempting to hide panicked emotion in my voice.
“Oh, yeah, I guess that’s right.”
“What were you planning to do – drive yourself to the hospital?” Mom drove until she was 88, without an accident on her record.
“I don’t know,” came the answer. Yeah, something was wrong. I still didn’t catch on. Not until after the surgery.
Mom went through a month of rehab in a building that was part of her Independent Living center. The physical therapy was progressing nicely, and her hip seemed to be doing fine. I had conference calls on a regular basis with the therapists and nurses who cared for her, and finally, they dropped the bomb.
“Your Mother can’t live alone any longer.”
Those words landed like soupy cement in a foundation frame. Heavy. With finality. Just what did that mean?
“Why? She seems fine.”
They had run cognitive tests, and concluded that some type of dementia was taking hold. I purchased a ticket and flew to Indiana. Whether it was the universe, God, or just the tightness of my muscles, my back didn’t hurt at all during my entire trip or the visit with its weighty mission. My dad, who was a minister, used to say that God tempers the wind to the shorn lamb.
Within a half hour of seeing Mom, I knew they were right. Her apartment was a mess. Supermarket flyers, bills, greeting cards and tax records were all jumbled in piles on end tables. This woman had written the manual on organization. She ran her neighborhood association for close to twenty years. She systematized photos albums by geography and chronology, made sound financial decisions, wrote clear tabs for files, kept our kindergarten art projects separate and clearly marked. Jumbled piles of unrelated items were a warning sign. I met with the Director of Rehab.
“Your mother is a wanderer (they actually they called her a “flight risk.” Look that one up. It refers to criminal activity. I was quick to correct them). She left rehab twice and went back to her apartment.”
A flicker of a smile had to have crossed my face, but I stayed on focus. Running away from rehab? I was so proud of her.
“She can no longer live alone, and she can’t stay here. We don’t have a secure memory unit in our facility.”
The walls caved in. I’m not sure if I said anything at all. I was so pissed that they had abandoned my mother– and me. The Director handed me a sheet of paper. This and That Assisted Living facilities with Memory Care Units were listed in alphabetical order. She may have made several recommendations. I was staring at a trembling piece of copy paper with my mother’s future address written somewhere.
I left the office and returned to Mom’s apartment, where she was busy leafing through the piles of dissociated junk.
“Hi!” she chirped. “I was wondering where you were. Isn’t it time for happy hour?”
It was time for happy hour.

This is the first in a series called The Lighter Side of Alzheimer’s by B.B. Boudreau. Marjorie Buls, the subject of these accounts, now lives in Harbor Assisted in the memory care unit in Ft. Wayne, IN, where a marvelous staff watches over her.