The plan was to throw a 140th Birthday Celebration for our 60th and 80th birthdays, which happen to land only three days apart.  We had originally planned to rent the Gloucester Fraternity Club and invite everyone we knew. After all, we only turn 140 once. The club booked and we were beginning to make plans for catering and invitations when COVID reared its ugly head. It didn’t take too long to realize our landmark birthday would not happen as planned.

So we settled in for quiet birthdays, and June 11 (mine) dawned sunny and clear and I woke up happy. Sixty. Wow. It sounds pretty strange to me, but on Sunday, Al will be 80, so I’m feeling pretty young. Frightening how quickly life proceeds and suddenly you’re 60, which sounds SO much older than 50. Maybe because it is. 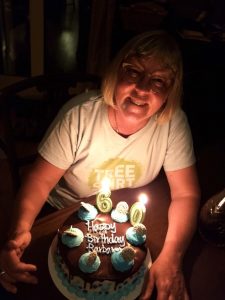 I shuffled out of the bedroom only halfway out of sleep world, and Al met me in the kitchen and told me to close my eyes. He took my hands and led me to the dining room table, where he told me to open my eyes and then sang Happy Birthday. A very smartly decorated cake with a big 6-0 sat beside a dozen red roses. Ahhhhhhh! I don’t care what kind of woman you are, red roses are the zenith symbol of love. So glad I’m not married to a guy who thinks flowers are a waste of money. Even though they are, to be truthful. It was a super jump-start to a landmark birthday that had threatened to be disappointing. I was gonna have a great day.

We climbed in the car mid-morning to drive up the line to Saugus, where we planned to pick up a new phone for my birthday. I’m not a super-techer, but I do recognize the value of a good Smart phone. My current one is a hand-me-down from Al to replace one of the many that ended up in Davy Jones’ locker during various boat trips. It stinks. I can’t even understand the person on the other end. I have wanted to launch that thing out the window several times. The excitement of the trip was dashed away when we arrived at the store to find that when Al had ordered the phone two days before, that particular model was out of inventory at the time, so we would have to pay an extra $30.00 upgrade fee originally waived with the on-line order. But since we actually got in the car, drove all the way to the store and now the phones were in inventory, we would be charged the $30.00 upgrade fee for picking it up. At one point, I heard myself say, “I have no idea what you’re talking about.” And by the way, the salesman couldn’t activate the phone or transfer the contacts because of the COVID situation and there was “nothing he could do about it.” Al asked for his supervisor, who the guy then called and announced would be arriving after an hour. No manager on site.

“Never mind,” Al grumbled, and we walked out. Customer Service just isn’t what it used to be, and technology is certainly starting to control our lives. My question—If the guy couldn’t fix the $30.00 fee snafu and also couldn’t open the box, activate and transfer all my contacts to the new phone, just what was his role? Hmmmmmmm.

We decided as a recovery strategy to get lunch at The Farm, a great barbecue place in Essex. We would get take-out and then go home to eat lunch. I called repeatedly and was not able to get through, wondering the whole time whether they were even open during COVID. Finally, having arrived at The Farm, I called again and this time they picked up. Yes, they were open, and we could sit outside and eat. Perfect! I checked the radar on Wundermap, and saw that a storm front was headed our way. Maybe there would be enough time.

We sat down at the outside table and ordered ribs and Caesar salad. It felt so strangely wonderful to once again be sitting at a restaurant having lunch. The ribs and salad came and we worked our way through the delectable sticky plate, one eye to the sky. Just as we were getting to the end of our meal, the atmosphere darkened thickly and without warning, huge rain drops began to pelt our table. The few diners outside all ran for the door shielding their soggy lunches.

We had the remainder of our salad packed to go and paid the bill, once again running through the pounding rain to the car. I tried not to think about the failed phone purchase and decided to get home and work the rest of the day until dinner. Maybe I could accomplish something amazing.

Al then announced that on top of ribs and salad for lunch, we would enjoy the indulgence of lobster for dinner. Ah, my. While I got on the computer and poised my cell for a call to one of my staff members, Al took off for Market Basket.

A short time later, he came in the door, blood on his hand, blood on the lobster bag, mumbling something about having fallen inside the market. What? I got off the phone and followed him into the bathroom, where he was cleaning the blood off of his hand.

“I fell in the supermarket. The floor was wet and I went right down and hit my head.”

“Did you talk to anyone there?”

“A bit. They wanted to call an ambulance and also wanted to do an incident report, but I just said I wanted to go home.” He groaned and attempted to shrug the pain out of one shoulder.

After a few minutes of questions, I found out just what had happened. He hit the wet section of the floor left by customers tracking in the rain from outside, and his feet went right out from under him. He hit his right elbow, his back and neck and finally, the back of his head.

“We have to do an incident report for them,” I said. “What if something happens because of this?”

“Well, I’m not going back,” he groaned and lay down on the sofa. I checked his head and didn’t see anything but a lump starting to grow beneath his hair.

I jumped in the car and drove up to Market Basket. This had to be done before the people present during the fall left work. I encountered a nice young woman (but then everyone seems young now that I’m 60) named Eleanor. She helped me fill out an incident report to the best of my knowledge about what had happened, and also explained that they tried to get him to go to the hospital. She was very concerned, but then she should have been. The floor had been wet and Al had told me he didn’t see any “wet floor” caution signs. I thanked her and drove home.

“You have to go to the hospital,” I announced as I came through the slider. “What if something happens? You could have a concussion.”

He tried to disagree, but I was adamant. Weird things can happen days after trauma to the head. I drove us to the hospital and dropped him by the front door. By the time I got inside, they had finished with their initial inquiry of questions due to the COVID situation. I answered the same list of questions through my mask and they directed us to the ER. A nurse soon came out to take him in, but I was not allowed, due to the COVID situation.

“How long will this take?” I asked. No use sitting here in the hospital when I could go home and relax sans mask. As I exited the ER doors, I felt myself starting cry.  I was so worried about Al and what the tests would show. Plus his birthday was only three days away, and what did that mean? Was he going to be laid up for his 80 birthday? Like the old man that he wasn’t?

I drove home and fed the dog, then sat down and tried to read, but my thoughts were on my husband. What if they kept him overnight? I glanced up at my roses and thought about the lobsters waiting inside the dark refrigerator. Things were not turning out as I had hoped. Those bugs had to be cooked! I just couldn’t consider eating lobster alone.

In less than two hours, the phone rang. It was Al asking for a pick up. I drove quickly to the hospital. He was standing in front of the ER door wearing the proverbial medical bracelet and holding some papers in one hand. I was so relieved that he had been discharged. It meant he was OK.

As he got stiffly into the car, I quipped, “How dare you pull this on my birthday?” He smiled, attempting to make himself comfortable on the car seat.

“Yeah, you were getting too much attention.” We laughed a bit and I started asking about the hospital visit. No concussion. Nothing broken. Thank goodness.

The rest of the evening was pretty quiet. I steamed the lobsters, covered the table with paper bags, prepared the drawn butter and we sat down to a feast. It was a wonderfully messy meal.

I cleaned up, bagged the shells and took out the garbage. We found a movie and ended up falling asleep after the exhausting day of unforeseen events.

I woke up the next morning and glanced out the window on beautiful murky fog threatening to break at any minute into a sunny, bluebird day. I found Al asleep on the sofa with the dog at his feet. I crept around quietly, fed the dog and made coffee, and within a few minutes, Al stirred and opened his eyes.

“How are you feeling?”

Everything was turning out OK after all.

He’ll have to take it easy for a few days, but I’m hoping that by Sunday, he’ll feel a bit better on his birthday, just two days away now. While this whole episode was certainly not what we planned, and disappointingly much less celebratory than a 140th bash, everything is fine. We are fine. We are healthy. I am employed and at home during this whole horrid COVID thing that has proven to be the hardship of my generation. Who knows? We could throw a 142nd birthday party next year. All I know is, I’m going to be extra careful where I walk on Sunday.