Death of a White Pine

I witnessed the death of a white pine today. And while most people have seen a tree fall, there is generally someone nearby brandishing a chainsaw. This was different. 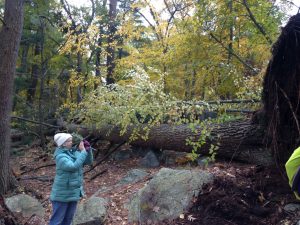 I had joined a Forest Bathing session—the practice of Shinrin-yoku born in Japan more than 30 years ago. The practice was created to address social issues caused by the pressure of school, work and life in general that led to problems of anxiety and even suicide. It is not a coincidence that this spiritual practice has grown legs in our own society. Everyone is stressed. Everyone seems to be buried under more work than they can handle. Traffic is horrendous. People are impatient. I have felt this pressure as well, though it makes no sense. We are living in one of the most affluent times in history. My world is like Disneyland compared to my parents, and their parents.

I work for state parks. It’s not triage. No one is bleeding; no one is dying. But yet, even in my benign career, all my coworkers struggle under the constant pressure of too much work; reports, spreadsheets, press releases, numbers. I went into this to help connect people to our fabulous natural world and the history that defines us as Americans. Why are we all stressed out?

Our Forest Bathing leader was Lisa. She is wonderful; a contagious smile, an energy that embraces the participants immediately in her mission to spread the healing power of nature. She instructed us to find a rock onto which we would dump the stress of everyday minutia. She directed us to then leave the rock at the threshold of our experience. We were first invited to observe the motion around us, to sense the life in our immediate environment. As a practitioner of Tai Chi and the power of meditation, I found this approach comfortable, and was soon immersed in the beauty of the forest around me. I reflected on how lucky I was to be able to do this on a beautiful fall day.

We had just begun the invitation to experience forest aroma. We were standing off a trail, breathing in the scent of our forest, when the sound of cracking wood pulled our attention up the hill. The cracking came from a white pine not far away, and we watched a few small branches tumbling from the very top of the pine. My immediate thought was that a squirrel had disturbed some twigs that fell to the ground, but the sound didn’t match the visual. We redirected our focus to the practice, when again, the cracking sounded, and we turned back to the tree.

The noise crescendoed and expanded, and while we watched, the entire 70 foot pine leaned our way, toppled slowly at first, then faster and faster, and the whole tree careened toward us. There would have been no time to run. The very ground shook with the impact of thousands of pounds of wood; a straight bole and all its hefty branches snapping as they struck neighboring trees on their way to the ground. It all happened in slow motion, yet was over in seconds.

The blast was fantastic. Organic matter crushing and snapping as living cells rent and tore in a relentless race toward stasis. Then all was abruptly quiet. I wish I had a photograph of our faces.

For those who have seen a tree fall in the forest, it is cataclysmic. We stood immobile for several seconds, not believing that we had just witnessed the death of a pine that had stood on that site for generations. Over one hundred years ago, a seed germinated, sending out a tiny shoot that anchored itself in the ground with thread-like roots and then proceeded, year after year, summer into winter to grow and widen into the mammoth organism that had for some reason released itself from the earth. 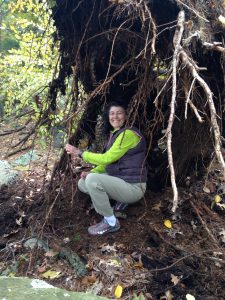 Even flat on the ground, the tree still seemed dangerous, but it was too tantalizing to avoid.

We approached with caution, still in shock, when the entire vicinity exploded with the embracing scent of pine. The shattered branches and strafed needles blasted out the fresh aroma, releasing the cleansing power of pine scent all too familiar from Christmas celebrations, car ­­­­deodorizers and household cleaners. We are all familiar. But this was different. It was all encompassing, surrounding us and embracing us with the powerful natural scent of one of our most common trees—the white pine. It is a powerful essential oil that can combat bacteria and viruses, and has been used by people for hundreds of years.

Our Forest Bathing session was completely transformed at that point. We were all stricken with the event we had just witnessed. We climbed all around the tree, examining its branches and root system that had wrenched itself from the forest floor, breathing in the aroma of wet earth in the crater it had left. The branches were snapped clean almost to the trunk, exposing yellow wood oozing the water that had been the tree’s demise. Three days before, torrential rain had fallen here and the ground was saturated.

I found feathers from a slain blue jay among the rubble, another example of death preserving life for the predator that had killed and eaten the beautiful bird. I fingered the long yellow roots still turgid with groundwater hanging limply from the tree’s base. I thought about what would now follow—the long, unhurried process of decomposition as microbes reclaimed the energy of this organism. Something good had to come from this death.

After several minutes, a chucking sound drew my attention to a neighboring pine, where a red-bellied woodpecker was raising a ruckus, lurching up the trunk in erratic movements, calling and calling. It was soon joined by a nuthatch, and then after, by several other song birds. A red-tailed hawk circled and cried overhead, tracing the open window exposing blue sky. They were bearing witness to the disappearance of one of the constants in all of their lives, now toppled to the earth, leaving a gaping hole in the forest’s canopy.

We had nothing to say, yet everything. We discussed how exceptional this event had been. We shuddered at the possibilities of having been just a couple hundred feet closer. Lisa directed us to a nearby trunk, just ten feet away from the toppled giant, where she had staged some birch conch tea for the conclusion of our session. Though the trunk was intact, a very large branch lay balanced atop. We would have been sitting right there in the next ten or fifteen minutes.

We spread a blanket and drank the tea alongside the fallen titan, engulfed in the pine scent that permeated our hair and clothes.

Walking out, I thought about the fact that I would never again view a white pine tree in the same way. This one event would forever link our lives in a way that nothing could. It is possible that no one else on earth knew about the death of our pine.

I will visit this tree again and again, watching the return of organic material to the soil, creating future life, keeping vigil over the giant organism that happened to fall on this day, Tuesday, October 30, 2018. It will be forever our tree.