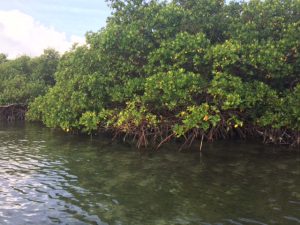 I was recently in the Bahamas to escape at least part of the winter. I don’t mind winter, just the length of it, so even a bit of away is a bonus. We sail and fish, and I spend a great deal of time just sitting and looking and pondering the amazing world in which we live. During this trip, the incredible mangrove caught my attention.

Mangrove forest is both tough and tender – strong enough to survive hurricane winds, yet gentle enough to nurture the babies who feed the world.
They are some spooky snorkeling, and not much to see until you slow down and really look. Millions of silver baby fish wiggle by in orderly schools, not a bit scared; just looking. The ghostly roots and branches provided excellent cover as their algae–draped limbs snake down through the shallow water to anchor deeply into the mucky substrate—deep enough to endure wind over 100 miles per hour and the waves driven by such wind. It is little wonder that the mangrove has been chosen by nature to guard its most vulnerable young ones.
Another testament to its toughness is its mindboggling ability to live in salt water, a deadly environment for most life. Mangroves put up more carbon than their inland forest counterparts. Their soils are constantly waterlogged, they filter salt out with their miraculous roots, just sipping less than a third of their temperate counterparts.

The picture is equally as impressive as trees that grow on high, frosty mountain slopes or rugged, hot wind-swept plains. The resilience of our fringe environment vegetation puts the vulnerability of Homo sapiens to shame. We northern hemisphere residents are even unable to drink water from natural sources without boiling and filtering first. Oh, boy, are we in for trouble when the lights go out. Mother Nature is by far the most selective force on the planet, and she occasionally puts on a demonstration just to show who’s boss. Do we listen? Some do.

Those living in close contact with nature generally step back and let Mother do her thing. Others regret their ill-conceived decisions: driving in a blizzard (on round wheels, no less!), chasing tornadoes or hanging around for the hurricane party. Meteorologists talk about the wind speeds, which are a substantial force. More powerful yet is the water driven by the wind; storm surge, terrifying waves, with power enough to destroy bridges, concrete foundations and transport tons of sand out to sea. But not our humble mangroves standing guard over the babies. Their waxy leaves may be stripped temporarily, but these are by design expendable and will grow back after a storm. The hundreds of twisted roots anchored deeply into earth and their beautiful above-ground counterparts hold fast through tempest and blasting heat waves, eventually releasing their fishy guardians to the world as a reliable seemingly never-ending food supply.
And yet, when coastal development takes place, those are the first plants to go – those ugly mangroves. With one fell swoop of a heavy machine, not only is all the future food supply gone, but the wind and wave protection as well.

Wahhhhhh????? In their place, we import plants that won’t survive unless we water them – never mind when the sky turns black and the water rises. The story doesn’t end there. Many human decisions are ego-centrically (though not intentionally) opposed to nature and financially lucrative for the inventor.

Chemical solutions for everything from high blood pressure to bugs on vegetative monoculture we call “food,” these things that will eventually poison us. The whole myth of “low-fat” and manufactured foods being better for us than butter and animal products. Bottle-feeding rather than nursing our own babies are just a couple of examples of how far astray we allow ourselves to be taken. Homo sapiens; the strangest creature on earth in defiance of Mother Nature. Few comedies are cleverer. 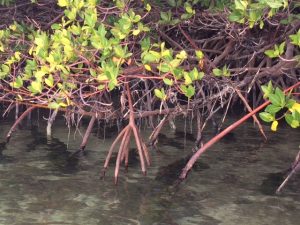 Close up of mangroves in Royal Island, Bahamas

Thankfully, certain factions among our kind have the wisdom and foresight to preserve the very things that save us from the destructive power of nature. We have protected marsh and forest. We’re getting better at seeing where we have gone wrong. Among these discoveries, The Everglades in Florida is now up front and center in recent news. And though much of the Everglades is grassland, the entire western edge of it is—guess what—mangroves. The nursery and guardian of our baby fish and shoreline.

There are loads of sources on-line that tell the natural history and ecological story of the mangrove. Like our northern marshes, mangroves are the glue that holds the southern environment together. It’s worth a read.