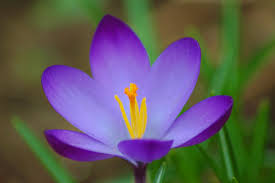 Why do we reserve these words for sports?

There are other types of “opening” days—days that come only once a year and then are gone for the next 12 months. Just like sports. No one schedules them, writes them on the calendar or draws up an agenda to make sure all the tasks are finished in time for opening day. This opening day simply comes in perfect time almost to the day every year. That day came this last weekend.

It was opening day of my garden. The crocus is first string. I could trump the crocus by planting an earlier bloomer, but I quite like the flashy purple greeting, orange pistils and stamens stretching out to beckon the hardy spring honey bees that find only crocus in their brave forays.

Last year’s sacrificed leaves crackle between the tines of my rake. They will become the top of the compost pile this year, maybe the middle of the pile next year, and the following year or the next, they will be soil that I shovel out of the bottom of the bin to cycle to the garden. It will have changed color and texture. It was fragile and brown and dry; now it is black, heavy and odorous, smelling of the musk of the earth and its decomposers.

Opening day begins with a rake and ends with a beer. I see dozens of worms wriggling away from the upheaval and the robins trail me like children after ice cream. They have seen me clean the garden on opening day before, and pay no attention to my movements unless I get too close. I won’t know what is under the dead leaves until I flip them with the tines. It might uncover the surprise of almost-spread petals that damage easily, or perhaps just the spear of a shoot poking up from the ground which can endure the gentle strokes of my rake. I know approximately where the crocus are, and hand pick those spots to prevent any unintended damage.

My eyes are constantly scanning, wishing for the heads of the hosta. If I step on the emerging shoots, it can ruin the look of the plant for this season. It is still too early. Only the crocus are allowed to give their show for opening day. The hyacinth and tulips are on deck, waiting for English Bluebells, followed by the snow drops, and then the bloom silently ends and the hosta takes over for the closer. They are beautiful, hardy plants that grace the garden all summer, eventually sending up their odd, spiky purple flowers as if they needed to embellish their beauty further, but the blooms are less than the vegetation which will be triumphant until fall.

The tulips are orange and purple. The orange ones actually bloom yellow and sent me to the phone the first year they emerged. Messelaar Bulb Co. has been importing varieties of bulbs from Holland since World War II. The man chuckles into the mouthpiece and asks me to wait a couple of days. “They will turn orange,” he assures. Bulb humor. He is right. Almost immediately upon opening, little veins of orange creep up the petals and soon, my “yellow” tulips are transformed. Amazing.

Spring was long in coming this year, and winter is hanging on even into May. I think I’m the only one who is happy about this. The heat of summer is too much for me and collapses the flower petals into limp, lifeless vestiges of their former splendor. The forsythia and magnolia are now in full bloom, triggering memories of the first time I came to this town twenty years ago. I wanted to live here for the rest of my life, and so far, that is true. I want many more opening days with my garden, feeling the soil, gazing into the happy faces of my ephemeral friends who visit but once a year.